What have I gotten myself into???

The big event for the year in Weiser is the National Old Time Fiddlers Contest. It takes place the third week of June. There have been large plywood cutout fiddles, painted brown, that hang around town during that time. This year it was decided that there should be a contest to decorate the fiddles, it was announced about six weeks ago. Since the announcement Don has been dropping hints that I should do one, and I've been saying no. Yesterday I started getting some ideas and decided maybe I should do one. After I picked up the seven foot fiddle(which barely fit in my car), I read the paperwork I signed and realized that I have less than 2 weeks to do this. 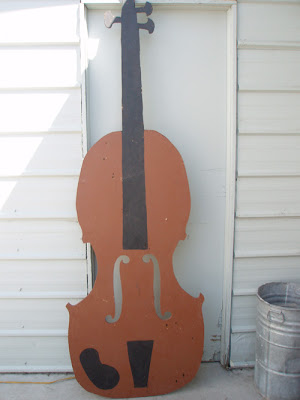 This is how it looks now. I'll take more photos as I work on it. I'm still not sure what I'm doing to it, but some of the ideas are a diamond pattern (I've been working on a diamond quilt) or black and white circles. I had breakfast with a friend who suggested I use some of my buttons. It has to be weather proof so fabric would not be a good choice. So what do you think?
Posted by Linda M at 9:56 AM