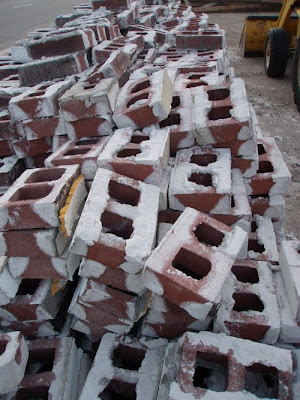 The above pile of bricks was in front of the old Senior Center in town, they are now in front of my house. A new Senior center was built next door to the old one and the old one is being torn down so there's room for parking. I had a small project planned for my backyard, I only needed 68 bricks. Don decided that since these were very inexpensive he would use them in a project he had planned. So six truckloads of bricks later, and two very sore bodies, the bricks are at our house. We got 800 of them!!! They weigh 12 lbs. apiece and each one had to be put into the truck and then taken out of the truck. Now there's more work ahead getting them in place.
Posted by Linda M at 12:39 PM