Recently a good friend gifted me with some vintage  pieced blocks. Although I appreciate vintage quilts they are not something that I gravitate to. For some reason these blocks spoke to me and I said, "Yes I'll take them". They are not actually blocks, but are foundation pieced X shapes. There is 29 of them, a few will be unusable because of stains and holes, but 25 are in usable condition. Here are a few of them on my design wall. 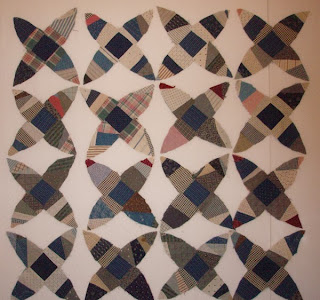 And a close up view. 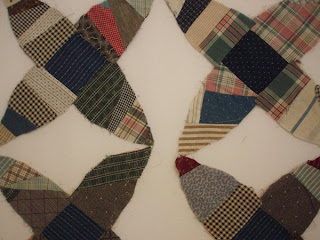 And since my camera is still occasionally doing psychedelic, here's vintage psychedelic. 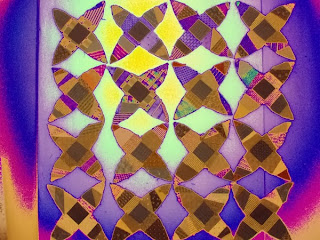 My plan is to appliqué each X on a four patch of very pale pinks,rusts and oranges. Then piece the blocks together. It will be a very long term project.

I've got kids and grandkids arriving on Wednesday so I will have a house full and very little studio time. 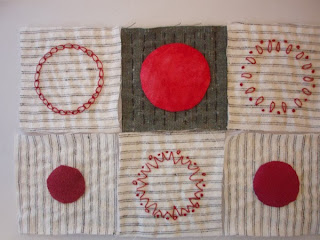 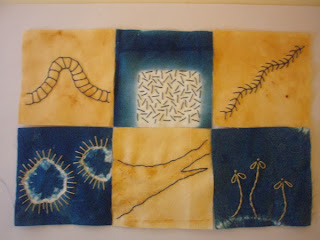 and the psychedelic version 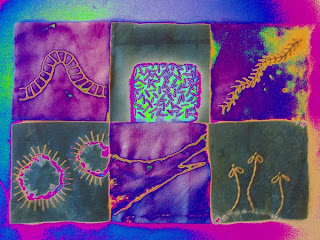 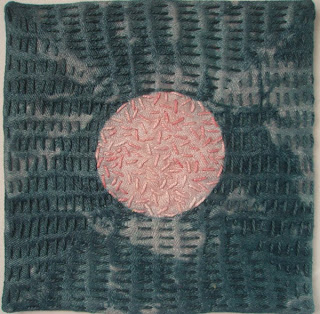 I would like to thank everyone that commented on my last post, I feel much better knowing that I'm not the only one that gets frustrated with all the wonderful technology in our lives. I have managed to overcome most of my problems from last week. Neither one of my printers will work wirelessly but the oldest one will work if it's plugged into the computer. I did buy the external disk drive and was able to install photoshop, I'm still working on learning  the changes that have been made to iPhoto but I'm making progress. My camera is still in for repairs and the old one has reverted back to doing some interesting things. I got the new one two years ago because the old one was taking psychedelic photos, well it's doing it again.

I finished stenciling the leaf blocks and have pieced them into twelve 15" square blocks. 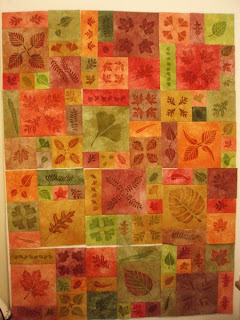 I tried to take a closeup, but got this instead. 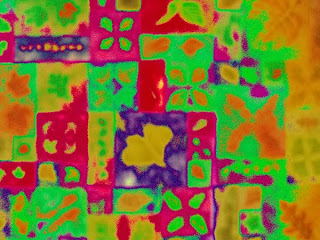 I am also doing some stitching on some of my indigo fabrics, here's a closeup. 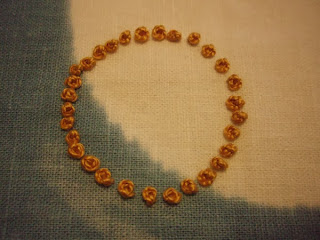 But when I tried to take a photo of a larger selection, this is what I got. 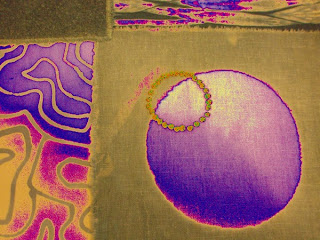 In reality this piece is indigo and white with a deep gold stitching. 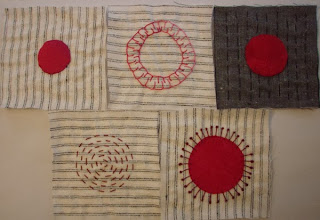 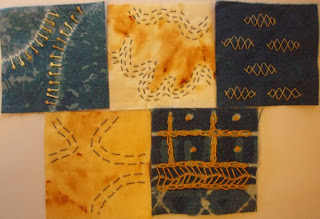 Hopefully the good camera gets to come home soon.

My computer is old enough that it can't be updated, has slowed down, crashes daily and was starting to cause some frustration. So this week I bought a new one - I love it, but now there's more frustration. I was able to download everything from my old computer to the new one from a backup hard drive with relative ease. At least that's what I thought until I tried to open Photoshop to resize some pictures for the blog. Today I have spent well over an hour with support and tech support from Adobe only to find out that it won't work. My new computer doesn't have a disk slot, it is an external piece of hardware that I would have to buy. My photoshop will only work on the new computer if I install it from the original disk. So I can either buy a $79 piece of hardware, download a $79 app from Adobe or aperture a $79 app from apple. My current decision is to use the old computer for blog posts.

I have two printers, neither one will work with the new computer and after spending most of my morning trying to get photoshop to work, I've decided to tackle that one another day.

My camera is in for cleaning, there was dust on the inside of the lens. So I'm also without my camera for about two weeks and have dug out the old one and charged up the battery. I've noticed a difference in picture quality, so that's my excuse for bad pictures. 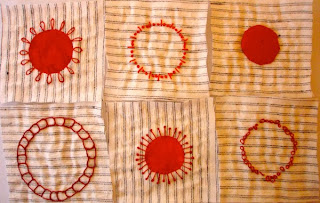 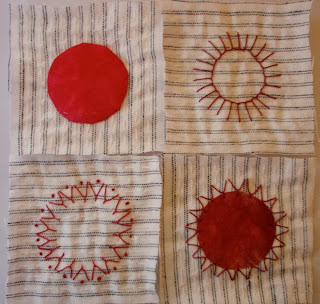 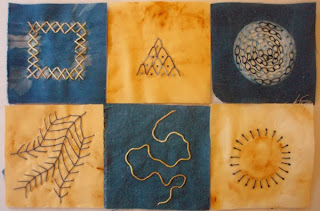 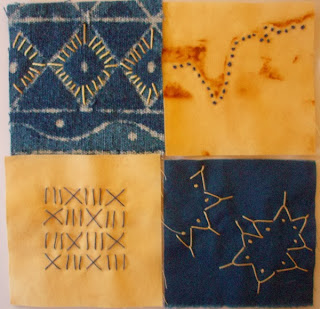 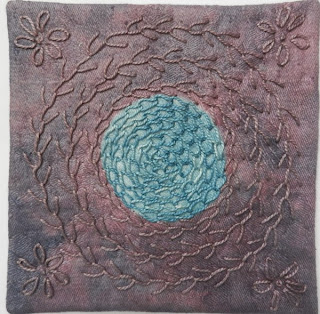 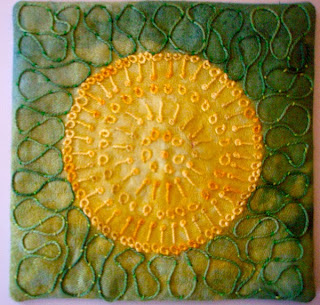 In September I showed some blocks I was stenciling for a leaf quilt, I got side tracked for a month or so but have now gotten most of them done. I've been sticking them up on the design wall by size, when they are all done everything will get rearranged. 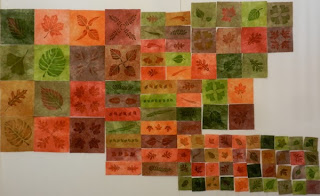 Snow flakes have been flying around here all day, thankfully none are actually sticking to the ground. I'm just not ready for snow yet, our fall has been so nice that I would just like it to last a bit longer.

I was out of town for a few days over the weekend, so I don't have much new to share. I have started on a small piece (10" x 7") for the SAQA trunk show. After starting I went back and actually read the given information and I may not have made the best color choice. I'm using some over dyed kimono silk and one of the pieces has a black background, and the finished pieces are going to be mounted on black. 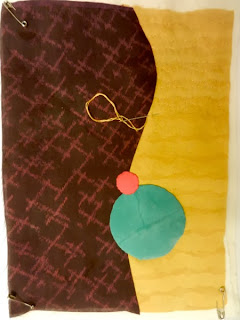 The colors are difficult to get photograph correctly. The gold thread is  what I'm stitching the gold side with. I'll finish it and see how it looks on black and if I don't like it I'll do something else.

I did brush some teal paintstik on to the piece I quilted a couple of weeks ago. The color is better, but I don't care for the way it looks. So on to plan B - paint the back! I will probably need to get some more paint, my supply is low because I haven't been using much lately. 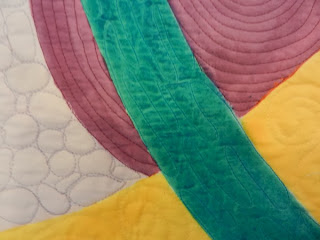 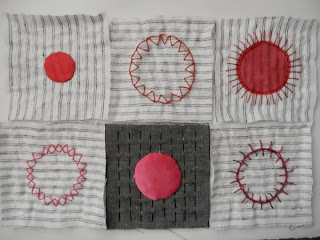 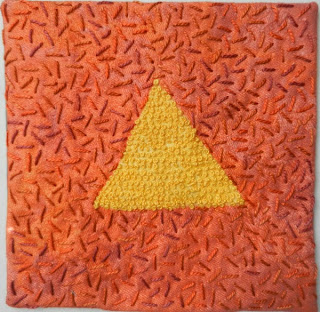 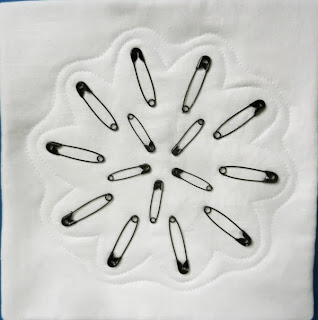 Linked to "Off the Wall Friday", go check out some amazing work.
Posted by Linda M at 6:25 PM 2 comments: